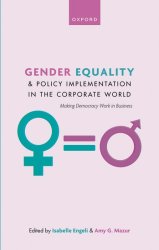 Résumé de l’ouvrage : Gender Equality and Policy Implementation in the Corporate World takes a unique approach to the issue of gender equality in corporations in the 21st century. It examines the implementation of specific policies that seek to promote women’s presence on corporate boards in 15 democracies in Western and Central Eastern Europe, North America, and Australasia through the lens of the Gender Equality Policy in Practice Approach. The thirteen empirically rich country chapters by leading country experts and two separate comparative chapter answer core questions. How were policies adopted and implemented ? Did they achieve any degree of success that would allow for real and lasting equality ? What were the politics of the pursuit of corporate gender equality across the 15 countries ? What worked and did not work and why ? What are the lessons to be drawn from these experiences ?

The findings of the book show that policy implementation does matter, but that in this last bastion of male domination, policies have had more success in increasing women’s numbers over challenging gender-biased norms that block women of all cultural and socio-economic backgrounds from gaining real power on boards. The path-breaking study shows that the reasons for this slow change are highly complex and case specific, in the details of each policy mix. While progress has been slow in coming, it has still been made even in these challenging times. Future policy success, the book concludes, is in the hands of men and women willing to come forward to overcome these well entrenched obstacles.