Ephemeral materiality : a place for lifeless infants in cemeteries 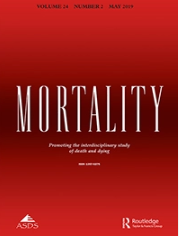 Stillborn infants were long excluded from Western cemeteries. They had no status, could not be baptized and could not be put to rest among the dead of their communities. After a long period of change, the loss of a child at birth now involves new norms and practices. This evolution has been the topic of a great deal of research on the handling of perinatal bereavement. In this article, we take an anthropological approach instead and focus less on the experience of parenthood than on the material aspect of these bodies and of the traces they leave behind.

In France, following recent reforms, stillborn infants and non-viable fetuses can now be given graves and their interment can be handled either by families or by the local municipality. This process is made up of different phases. The first takes place in the hospital delivery ward, where parents meet their deceased child and tangible memorial traces are created. The second phase is the burial. The third involves the process of memorialization. This ephemeral materiality is part of the social recognition of ‘children’ who die before birth. New kinds of funerary treatment are helping to humanize bodies and to ritualize ‘almost-births’ and ‘almost-deaths’.