Life in Care Homes during the Covid-19 Pandemic. The Social Logics of the Experience of the First Confinement 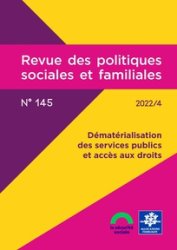 This article, based on 37 interviews with residents living in 15 care homes in France, analyses their diverse experience of the first lockdown. Firstly, we will show that the experience of the lockdown took on different forms depending on the residents’ lifestyles. For those who were used to staying in their rooms, life during the lockdown was very similar to before. Those who were used to spending time in the common areas felt deprived of their social life. Residents who were used to spending time outside their establishment emphasised the lack of freedom during the lockdown which prevented them from leaving the premises. Secondly, the article explores three key factors which influenced the reactions of residents : how lockdown was implemented within their respective care homes, the occupational background and social resources which the residents could draw on, and their previous life experience.